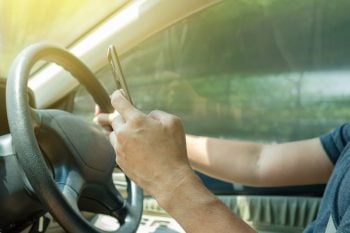 Drivers using a mobile phone illegally now have a greater chance of getting caught with NSW becoming the first jurisdiction in the world to introduce mobile phone detection cameras.

A mix of 10 fixed and portable mobile phone detection camera devices have been operational since 1 December 2019 and another 35 are planned over the next four years. Sophisticated software in the cameras automatically detects if a driver is handling a phone and the filtered images taken by the camera are then checked by a human eye by NSW authorities before a fine is issued.

The mobile phone camera detection system works night or day and in any weather conditions and its advanced camera and radar technology can operate accurately at speeds up to 300kmh. The high-speed and high-resolution technology is so accurate it could also be used to enforce speeding, seatbelt use, and detect the number of occupants in cars in transit lanes, however for the time being the focus of the new cameras will only be on detecting illegal mobile phone use.

Unlike NSW speed cameras, which have currently warning signs before them, there will be no warning signs for the new mobile phone detection cameras. However, NSW drivers caught by the detection cameras will be sent warning letters – but no fine – for the first three months of their operations with fines and demerit points to be issued to those caught from 1 March 2020 onwards.

Despite NSW having some of the strictest laws in the world restricting the use of mobile phones in motor vehicles, many drivers are still unaware of the extent of these prohibitions.

For all drivers and riders in NSW it’s illegal to hold and use a mobile phone at any time while driving or riding and includes using your phone while stationary at traffic lights or stuck in traffic. In reality, this means that a mobile phone cannot be held and used by a driver or rider for typical hand held functions including phone calls, video calling, texting, emailing, social media, web browsing and photography unless their vehicle is parked. It’s also illegal to access a Digital Driver Licence on a mobile phone when driving, including when stationary, unless you’re asked to do so by a police officer

Mobile phone use prohibitions extend much further for restricted licence holders, including Learner, P1 and P2 drivers and riders, as they are not permitted to use their mobile phone at all while driving or riding, including using the mobile device on loud speaker or as a navigation tool. This prohibition applies regardless of whether the mobile phone in use is being handled, resting on any part of the body, secured in a cradle or is being used hands-free (i.e. via Bluetooth).
Full (unrestricted) licence holders and bicycle riders are permitted to use particular mobile phone functions, including making or answering a phone call, playing audio or using a mobile phone as a driver’s aid (e.g. navigation), BUT only if the phone:

Penalties for Illegal Mobile Phone Use

These penalties apply to offences caught by the new mobile phone detection camera and infringements issued by NSW Police in conducting their duties.

If you or someone you know is issued with a Traffic Infringement Notice which they want to contest or are charged with a Driving Offence and would like more information about the available options please contact Oliver Hagen on (02) 4731 5899 or email litigation@batemanbattersby.com.au.