Home » Publications » Has your company signed the Contract correctly?

Has your company signed the Contract correctly? 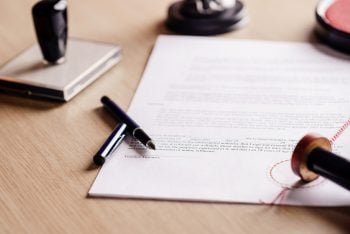 For a contract to be valid, binding and enforceable, it needs to be executed correctly by the parties to it. There are a number of ways that a document can be signed by a company and it is important that all directors are familiar with the formalities that need to be adhered to when executing documents.

In Australia, a company must either execute documents in accordance with: –

Section 129 of the Act states that people dealing with companies are entitled to assume that a document has been duly executed by the company if it appears to have been signed in accordance with Section 127.

Section 126 of the Act states that a company can resolve to authorise a director or other agent to sign on its behalf. In these circumstances, the other party to the contract should request proof of the authority to sign (eg the resolution) as the other party cannot rely on the assumption in Section 129 of proper execution for this type of signing.

Company Constitution and Powers of Attorney

A company can also set rules on how to execute a document through the company’s Constitution and vary these rules from time to time to suit the company’s business needs. Rules can also be made in the Constitution to provide for agents or representatives who are not company officers to be appointed to sign on behalf of the company whether in relation to all company transactions or limited to a specified type of transaction.

This arrangement is particularly useful for large companies who have a large volume of transactions where it would be impracticable for a director or company secretary to sign off on every one of them. Whoever is appointed as the company’s agent or representative must have the required authority to sign on behalf of the company. This authority is usually provided by a board resolution or alternatively by a registered Power of Attorney.

If you want advice about ensuring that your company is correctly signing contracts and other documents or would like assistance with any company or business matter, please call John Bateman or Michael Battersby on 02 4731 5899 or email commercial@batemanbattersby.com.au.

Examples of execution as follows… 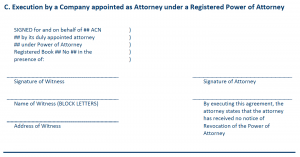 Download PDF Version:
Has your company signed the Contract correctly?