Home » Publications » Can I secretly record my spouse?

Can I secretly record my spouse? 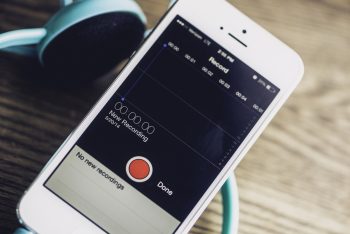 We’ve all had times when we can’t recall a conversation that someone else swears we had.  Often, one person in a relationship is more adamant about their memory than the other person.  Usually, those mini-disputes are minor blips in an intact relationship.  But what if it’s no longer an intact relationship?  What if the “he said/ she said” dispute becomes part of family law proceedings?

Most of us now have a smartphone at our fingertips which can make audio and video recordings at the click of a button.  One party might be tempted to secretly record their conversations with their ex-spouse or partner.  But, is that lawful, and even if it is, is it a good idea?

Is it lawful to record a phone conversation?

The short answer is no.  In NSW, the making and use of secret recordings is governed by the Surveillance Devices Act.  Section 7 of the Act prohibits the use of listening devices to record a private conversation to which the person is, or is not, a party.  A private conversation does not include a conversation made in circumstances in which the parties to it ought reasonably to expect that it might be heard by someone else.  A listening device is any device capable of being used to overhear, record, monitor or listen to a conversation or words spoken to or by any person in conversation and a smartphone will therefore constitute a listening device.  There are, of course, exceptions for ASIO, the police and similar organisations, but those exceptions wouldn’t apply in a family law situation.

The penalties for breaching the laws about intercepting or secretly recording a conversation vary, but can include paying damages to the other person and fines up to $11,000.00 and five-years imprisonment.

Can a secret recording be used as evidence in the Family Court?

There are some limited exceptions to the prohibition on the use of listening devices to record private conversations.  The prohibition does not apply if all principal parties of the conversation give their express or implied consent to the device being used.

The Family Court has a discretion whether or not to admit the recording into evidence.  In exercising this discretion, the Court considers whether the recording is reasonably necessary for the protection of the lawful interests of that principal party to the private conversation, such as to support or defend allegations of family violence.  The Court would weigh up the benefit to the determination of the case in admitting the recording evidence, compared to the detriment to the parties and the justice of the case in allowing one of them to rely on illegally obtained evidence.  The Court would also consider the relevance of the evidence and the difficulty (if any) of obtaining the evidence without the contravention of the Law.  It is important to remember, just because the illegal secret recording is admitted into evidence, the person who made the recording may still be liable to prosecution or damages for their offence.

Even if it’s lawful, should you do it?

The answer to this question will, of course, depend on the particular circumstances of the individual case.  In a case where there are serious, regular disagreements about who said what and when, perhaps because drug or alcohol abuse or significant mental illness are involved, secretly recording conversations might be justified, in those jurisdictions where it is legal to do so, such as Victoria, Queensland and Northern Territory.

However, even in cases where the secret recording of conversations might be tempting or may even seem warranted, before embarking on that course of action, the person wishing to do the recording should consider the future impact of considerable breakdown of trust in their relationship with the other person.  It would be difficult, if not impossible, to continue to trust someone if you find out they have been recording their conversations with you without your knowledge.  Ongoing trust between a separating couple is particularly important where children are involved and the couple need to share a parenting relationship into the future.

At Bateman Battersby we have a number of experienced Lawyers who specialise in Family Law matters.  If you need help or more information or assistance in any family law issue, please feel free to contact Oliver Hagen or Ken Gray on (02) 4731 5899 or email us at familylaw@batemanbattersby.com.au

Download PDF Version:
Can I secretly record my spouse

What is a caveat?

The word ‘caveat’ means ‘beware’ and arises in various legal contexts however it is specifically linked to property law….

Marriage, Divorce and your Will – what you need to know!

About half of all Australians don’t have a valid Will.  Of those who do, many make their Will and…